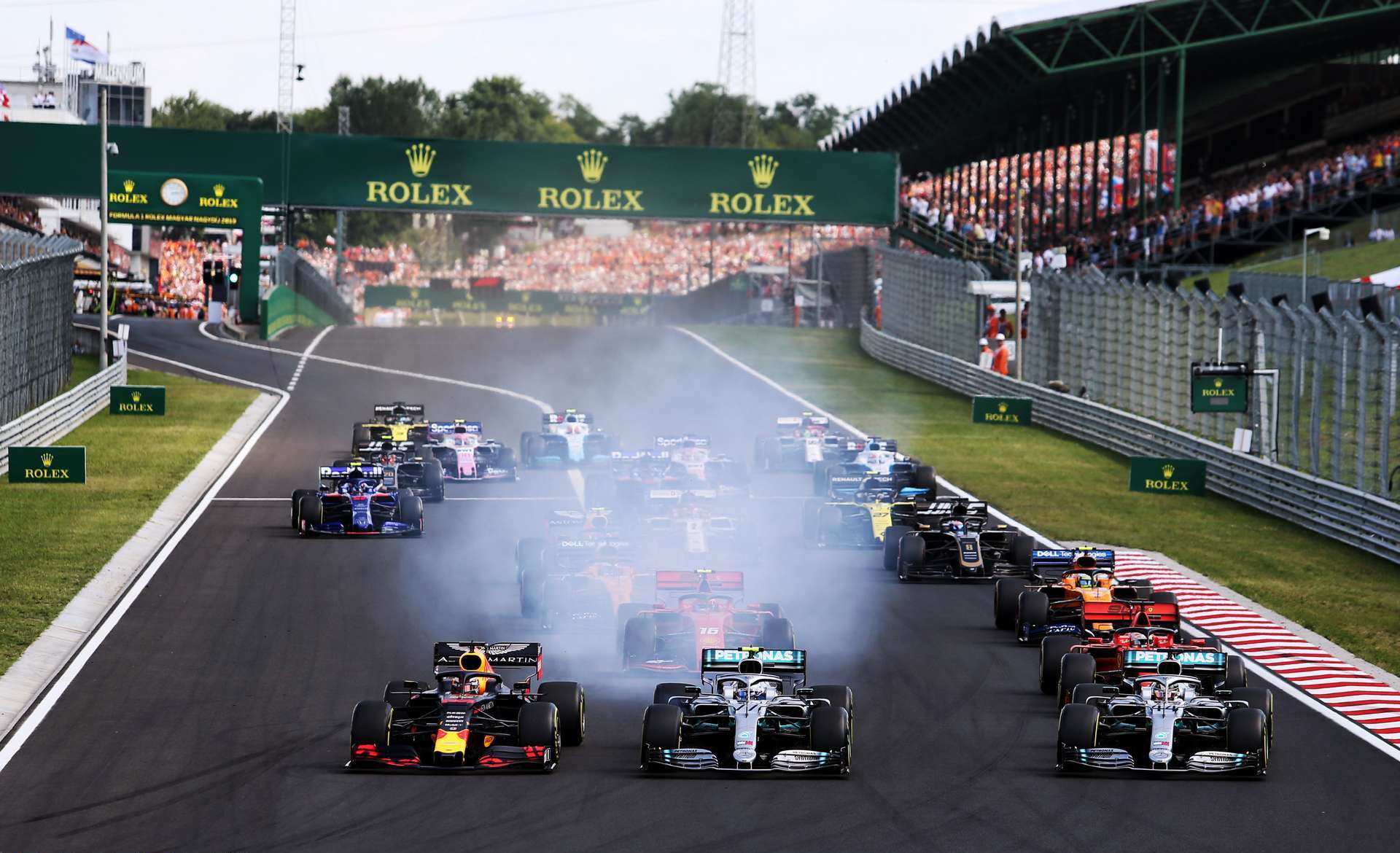 The 2019 season was one to remember with probably the best racing in the turbo hybrid era and now we present you the races that stood out.

With teams, drivers and personel already preparing for a new and really demanding season, we take a look on the races that were unforgettable and will hype all of us for the next one. Lewis Hamilton dominated again, reaching title number six and now he is one away from matching Michael Schumacher.

The 2019 had many memorable moments and fights and now we take a look to the 5 best races.

The race that started with controversy and a grid penalty for Max Verstappen, leaving the two Ferraris up front was always going to be exciting. With the Red Bull Driver certain to bounce back, we saw a dramatic start where he and Hamilton went off track at Turn 2. Verstappen dropped behind Bottas and later he had the puncture which put him last, whileHamilton in 5th, but soon he passed Sainz and with great pace, he remaind within striking distance of the Top 3. Leclerc and Albon where on a 2 stopper while the Champion chose to undercut Vettel on lap 24 for hard tyres, while the German pitted on lap 38. With fresh tyres the Red outfit was confident that they will pass the Mercedes driver. But Hamilton controlled his pace and treated the tyres in a way that even Vettel was impressed afterwards, holding Vettel and taking one of his best wins with immense driving in terms of speed and strategy.

Perhaps the best race of the decade at Silverstone, we witnessed a great battle for the win, the podium with overtakes, drama and strategy. Hamilton and Bottas fought freely without any team orders passing each other on the first stint, while the two Ferraris and Verstappen went “elbows out” with contact being inevitable. Verstappen passed Leclerc in the pits, but the Monegasque attacked him and repassed him on their out-lap and their fight continued until the Safety Car came out. Hamilton went for the 1 stop strategy but behind him the Red Bulls and the Ferraris fought immensely. Gasly dropped in 6th and then on lap 37 Verstappen overtook Vettel who then tried to take the place back but hit him from behind, resulting in a huge crash. This resulted in him finishing 15th, while the Dutch finished 5th behind his teammate for the first time. Up in-front, Hamilton was on his own race winning again on home soil with the fastest lap with an old set on the last lap, showing he’s on the form of his life. Also, last but not least the amazing performance from Sainz to take P6 by defending really hard in the end.

The race at Interlagos was one of the most iconic ones this year, having on-track battles, but also strategic decisions, driving errors and drama between teammates. Verstappen was on pole-position but Hamilton climbed to 2nd after passing Vettel on the start and started a fight with on the limit pace between these two. Hamilton did the undercut and passed Verstappen, but stuck behind Leclerc who was on old tyres and gave the Red Bull the DRS and with an empty battery on the Mercedes, left him defenceless and passed him back. Later on, Bottas retired bringing out the Safety Car and Mercedes left Hamilton out, leaving him vulnerable to Verstappen with a fresh soft tyre in which he took advantage and passed on the outside of Turn 1. And then came the Ferrari clash between Vettel and Leclerc which brought another SC. Again Hamilton chose the wrong strategy by pitting and losing 2 places and on the penultimate lap went on the inside of Albon and the two had contact. That promoted Gasly in P2 and Albon at the back with Verstappen winning and behind him an unfamiliar photo finish with the Toro Rosso and the Mercedes. After the race, Hamilton took a 5s penalty and promoted Sainz in P3 to take hid first podium and the first for McLaren after 2014.

Before the summer-break we witnessed perhaps the best duel of the year between Hamilton and Verstappen. The Red Bull driver the day before gave Honda their first pole-position in the hybrid-era and the Briton was 3rd on the grid. He passed on lap 1 Bottas, who saw Leclerc cutting across and destroying his front wing and had to make a change. Up front, Hamilton was just behind Verstappen and with better tyre management did the overcut on the pit-stop cycle and rejoined on lap 32 6s behind him with 6 laps fresher tyres. With a series of unbelievable laps, he caught him immediately and tried from the outside three times on lap 39 with his attempt at Turn 4 being the bravest with such a difficult apex. Mercedes then chose to follow the aggressive path by pitting Hamilton again 10 laps later for the medium tyre. Initially he couldn’t cut the gap, but forced Verstappen to push his tyres where he didn’t have enough life in them left. On lap 67 Hamilton with the DRS went on the outside of Turn 1, braked later and took the 1st place, which he kept until the end to finish with a brilliant and important win. The Hungarian GP was the worst of Ferrari with Vettel passing Leclerc for 3rd and one of the best of McLaren, with Sainz holding Gasly for P5.

When it rains the races most of times become unpredictable, especially if the conditions change all the time. That’s the German GP for the 2019, where we saw everything. Hamilton had a good start, with Verstappen dropping behind and Raikkonen being 4th. Perez crashed on lap 1 bringing the Safety Car out. When the racing resumed in green conditions, the standings changed from lap to lap. Hamilton opened a gap of 6s from Bottas who was fighting with Verstappen for 2nd place, with Leclerc unable to catch them behind. On lap 24 Vettel pitted for slicks and Verstappen followed him a lap earlier but had a spin in the last sector on lap 26. The track was drying out, but the rain came again. Norris retired in the last sector on lap 27 and at the same time Leclerc spun in the last corner and immediately saw Hamilton who just pitted (at the worst possible moment) going off. The Brit managed to return to the pits with violating the pit entry rule surpassing the bollard and had a horrible pit-stop of almost a minute and another SC had come out. When the green flag waived again, Verstappen was 1st with Hulkenberg behind him and Hamilton who had a 5s penalty was fighting for P4. On lap 41 though, the Renault driver went off in the last corner and retired after being stuck in the gravel, failing to get a podium. The track dried again and everyone pitted for slicks with Hamilton dropping outside of the Top 10 and left Bottas in P4 to fight for the podium. But on lap 57 he had an off at T1 –Hamilton had a spin too but managed to avoid the walls-, crashing in the barriers and brought out the SC again. On the restart Verstappen was on a league of his own and managed to pull a gap from Kvyat and Stroll who were on podium places. But Vettel out of all, managed with the speed of his Ferrari to go to P2, while Gasly and Albon had contact with the French driver retiring from the GP.

Verstappen won the best and craziest race of 2019 from Vettel and Kvyat and the stewards later on disqualifying both Alfa Romeo cars to promote Hamilton in P9 and Kubica in P10.

These where the best races of 2019 according to Automotonews.gr. We have also to give honourable mentions to the Austrian GP, the Italian GP and the US GP who didn’t managed to take a place in this Top 5. Tell us yours and follow Automotonews.gr for more.