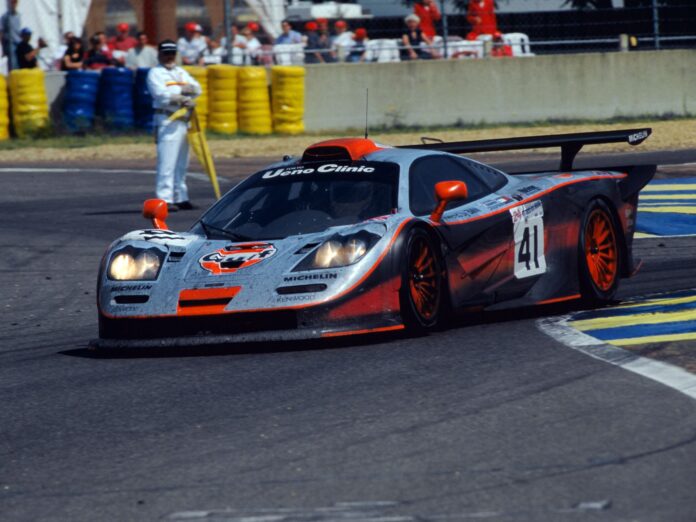 The McLaren F1 had already proven itself as “the ultimate road car” and although its creator, Gordon Murray, had no intention to take the car racing, things would change soon.

In 1994 the BPR Global GT Series was launched, with manufacturers such as Ferrari and Venturi running racing-modified versions of their road-legal sports cars. Over time the series gained popularity, to the point it was viewed as a possible replacement for the defunct World Sportscar Championship (WSC). 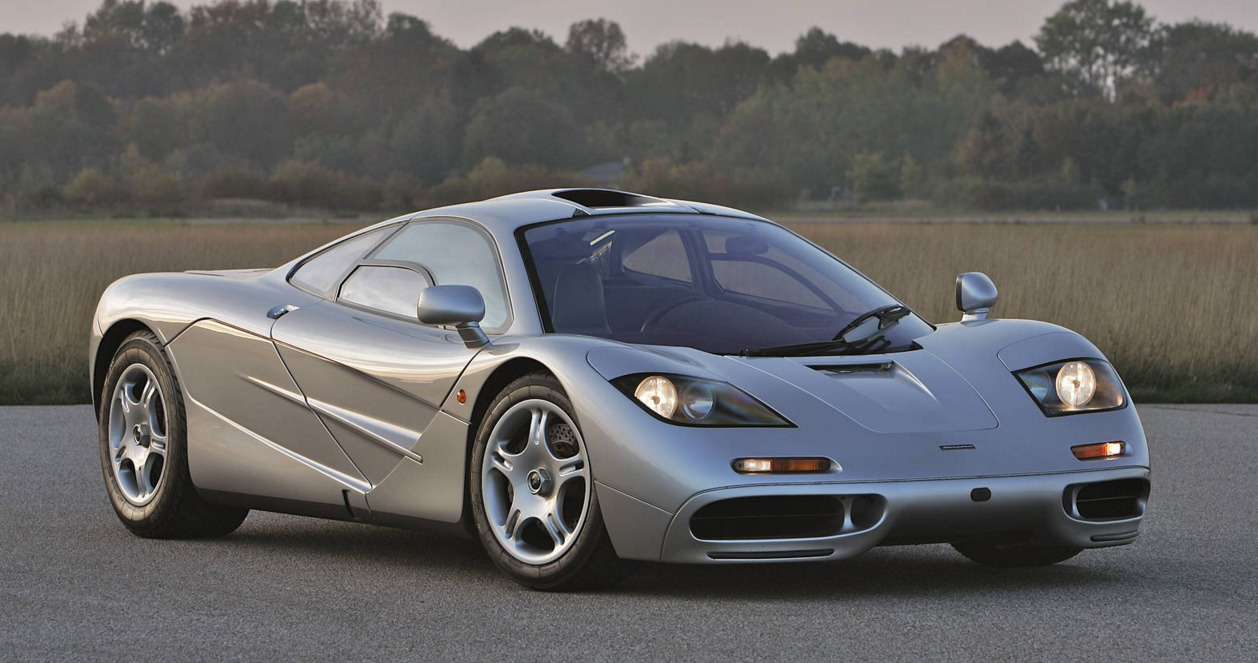 Several teams from all over the world, having witnessed the potential of the regular F1, turned to Gordon Murray in an attempt to convince him to offer factory backing on racing versions for the BPR teams. Murray initially refused. He ultimately relented and agreed to modify the F1 into a racing car. As a result, McLaren constructed several chassis for competition in the 1995 season.

Because of its similarity to a race car, extensive modifications were not needed to actually turn the F1 into a racing car. Bodywork modifications saw the addition of various cooling ducts, most noticeably a large one in the center of the nose and two placed in the location of the storage lockers, on the sides of the car. A large adjustable fixed wing was also added. The interior was stripped off all luxuries and given a full racing cage. Carbon brakes replaced the stock units. The engine, among other things like the central seating position, the butterfly doors and the gearbox, remained unchanged. It had to use an air restrictor though, dropping the power to somewhere around 592 BHP.

Before the official debut of the car, McLaren coordinated a 24-hour test at Magny-Cours in order to find weaknesses in the car, develop and supply upgrades to the teams. 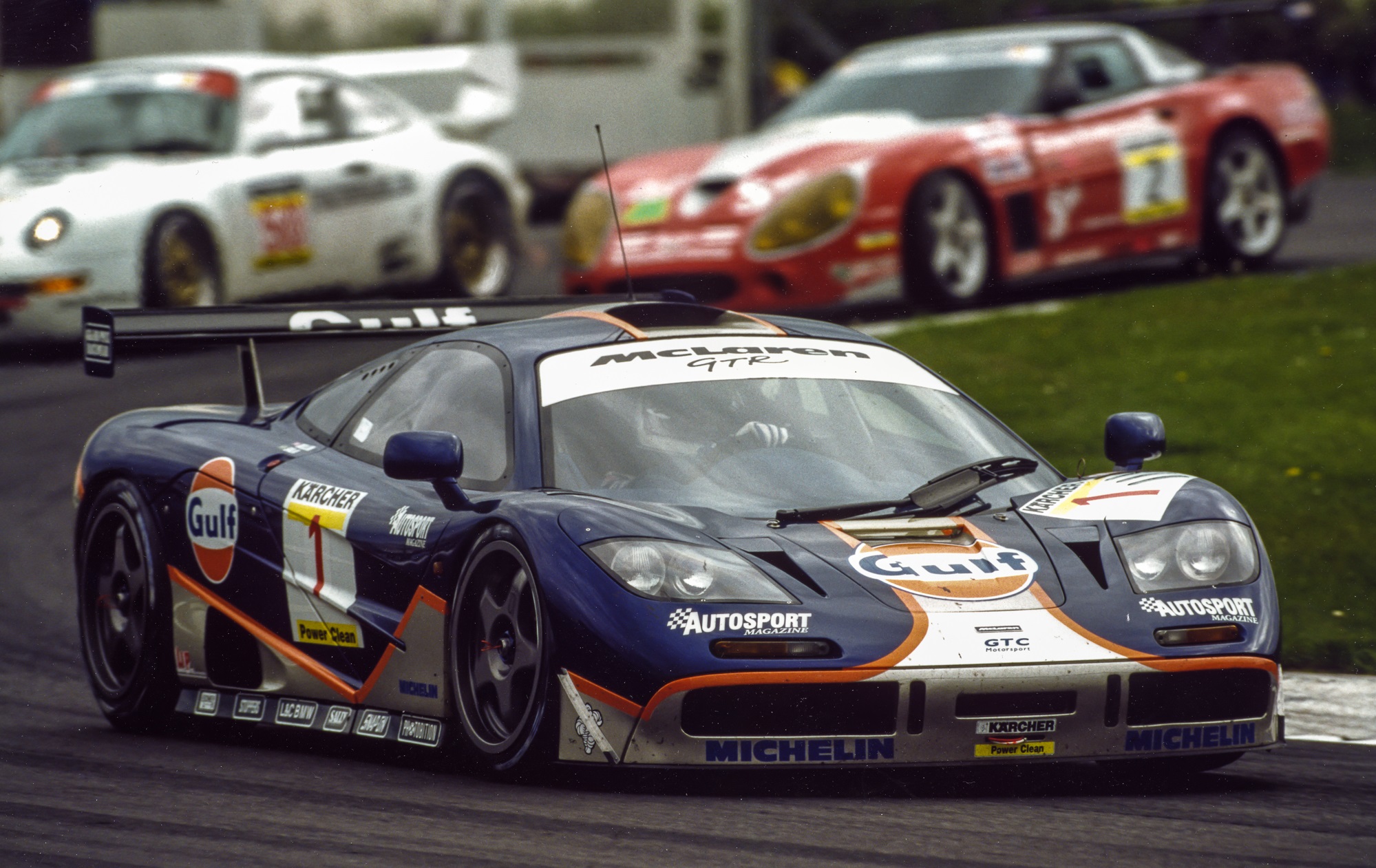 The F1 made its debut on March 26th, 1995 for the first round of the BPR Series, at the Jerez circuit. In the end of the season, it had obliterated its rivals by winning 10 out of 12 rounds.

Why does this one race deserve its own separate part?

Well, besides being the F1’s greatest achievement, it has a pretty special story behind it. Mr. Motokazu Sayama, owner of the Ueno Clinic in Japan, wanted his business sponsored on one of the six F1s entering Le Mans that year. So, he phoned McLaren and made his request. However, all of the other F1s were already covered in sponsors, but Mr. Sayama didn’t take no as an answer, offering to pay for another car to be built. But there wasn’t enough remaining time. The only functional chassis left was the #01R, used by McLaren as a developmental prototype.

McLaren agreed to make this Sayama’s car under one condition – If it somehow wins the race, McLaren would keep the car. If it doesn’t, Mr. Sayama would be welcomed to buy it. The terms were agreed and McLaren got on putting the car together, just six weeks before the event. The car was finished in time and made it to Sarthe for the prestigious Le Mans 24-hour race, entered by Kokusai Kaihatsu UK Racing. 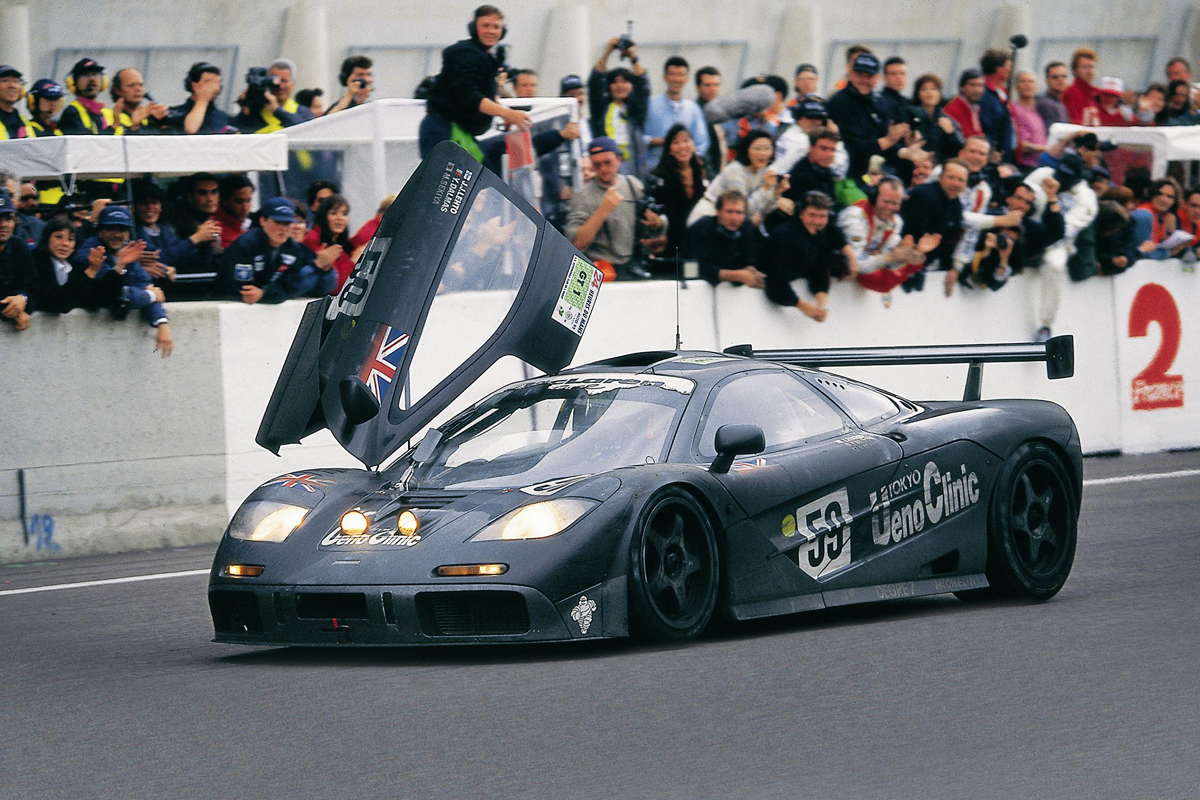 Driven by Yannick Dalmas, Masanori Sekiya and JJ Lehto, the car excelled under rainy conditions, despite battling against purposely built prototypes such as the Courage C34 and the Kremer K8 Spyder. It won the race, one lap ahead of its nearest rival, becoming the third and so far final GT car to do so.

However, this meant the car remained property of McLaren. As a token of appreciation, the #043 chassis of the McLaren F1 was built and sold to Mr. Sayama in a heavily discounted price, painted in the same color scheme as the triumphant #59 F1 GTR.

1996 – The reigning champions expand their supremacy

Following the success of the previous season, McLaren set forth to upgrade the car to remain competitive, especially against the threat of newer sports cars appearing, such as the Ferrari F50 GT (which sadly never raced) and the Porsche 911 GT1. They were assisted by BMW Motorsport, who at the time decided to use their connection to McLaren to enter sports car racing, by running their own race teams with F1 GTRs.

Among the modifications was an extension of the front and rear bodywork, including a larger splitter attached to the front of the car. The bodywork was also modified to allow quicker removing for easier repairs. The gearbox was modified to include a lighter magnesium housing and more robust components. The result was a further weight reduction of 38 kg. 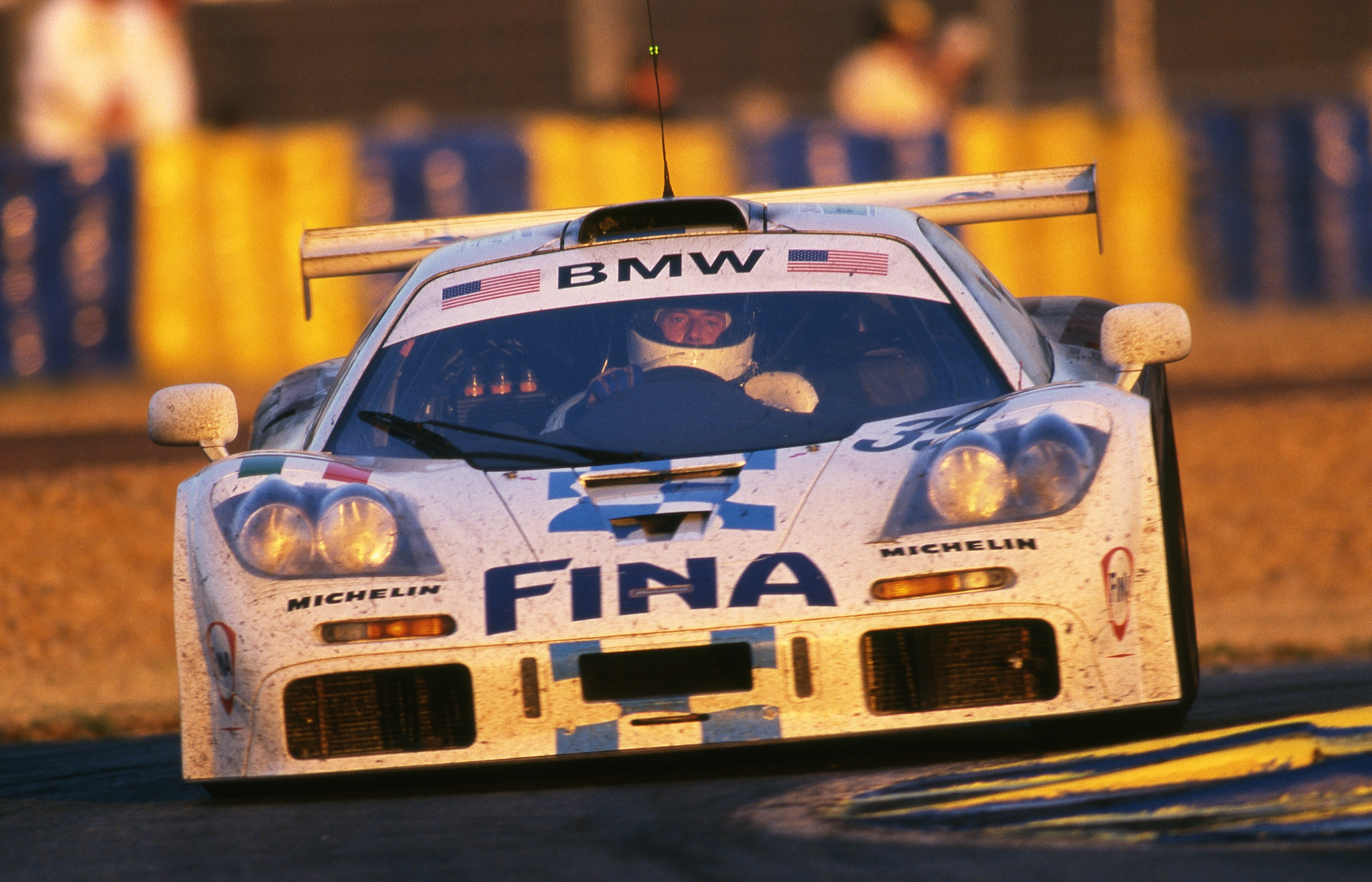 Just like in 1995, the F1 GTR dominated at BPR, despite facing some resistance from the new Porsche 911 GT1 late in the season. Sadly, they couldn’t defend their Le Mans title, with a best finish of 4th marked by West Competition, 16 laps behind the winner.

That year, the car also found success in “the Land of the Rising Sun”. Team Goh entered two F1 GTRs in the GT500 class of the JGTC; the #60 car was driven by Naoki Hattori and Ralf Schumacher, while the #61 car was driven by David Brabham and John Nielsen. McLaren took victory in 4 out of 6 races to win the title, making history as the only non-Japanese manufacturer to do so, an achievement they still hold to the present day. 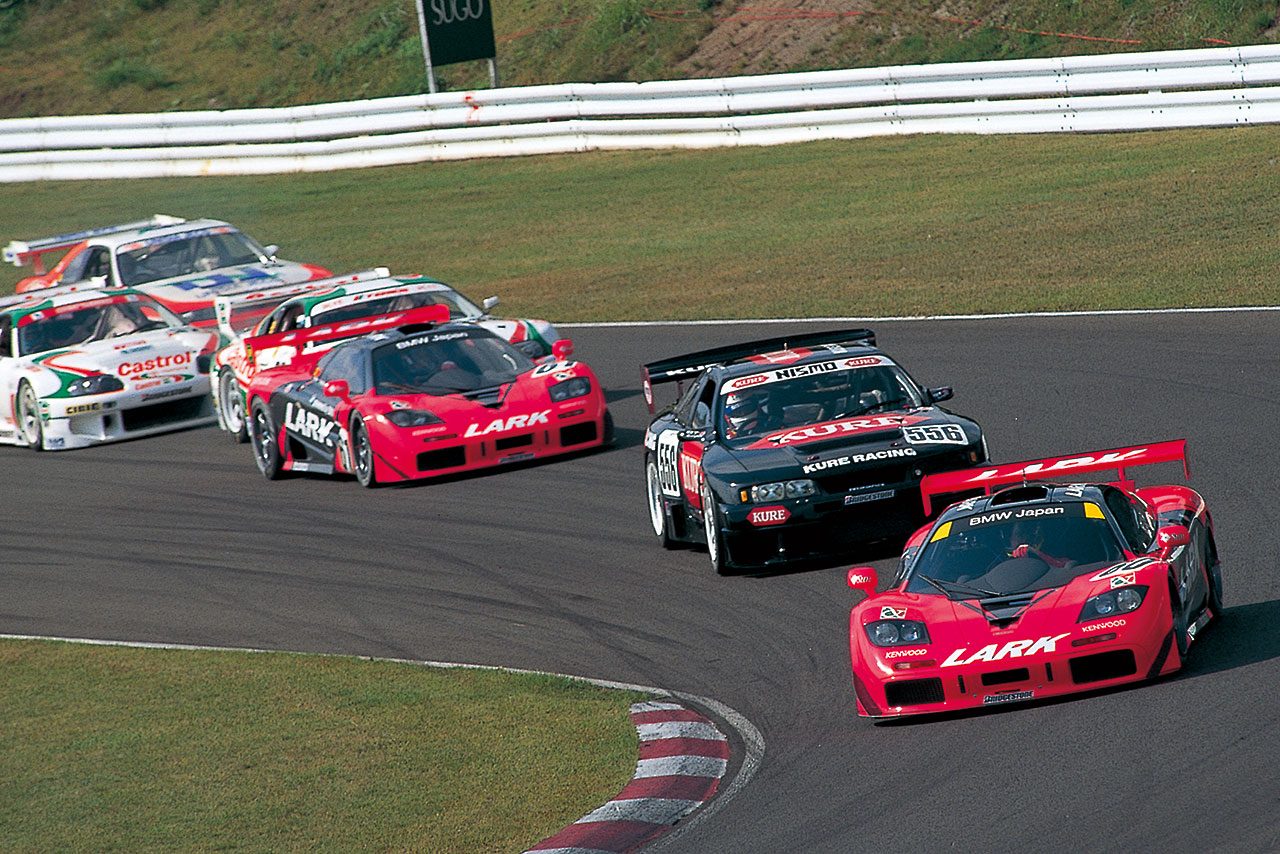 But the most significant thing happening that year was McLaren indirectly giving life to their own nemesis: the Mercedes CLK-GTR.

The BPR Global GT Series was reformed into the FIA GT Championship. Rules regarding the cars used in the premier GT1 class were altered. Homologation specials like the Porsche 911 GT1 had already proven their worth in the final races of 1996. McLaren was therefore forced to give the F1 extensive modifications, with increased assistance from BMW Motorsport, in order to compete against cars which had been meant as race cars first, and not road cars like the F1.

Although it retained the same carbon fiber monocoque as the road car, the entire exterior of the car was race-purpose built. A much longer nose and tail were used, as well as a wider rear wing, to maximize the amount of downforce. At the same time, the wheel arches were widened to allow maximum gains in tyre grip. The engine was also modified; displacement was dropped from 6.1 to 5.9 litres for better durability. 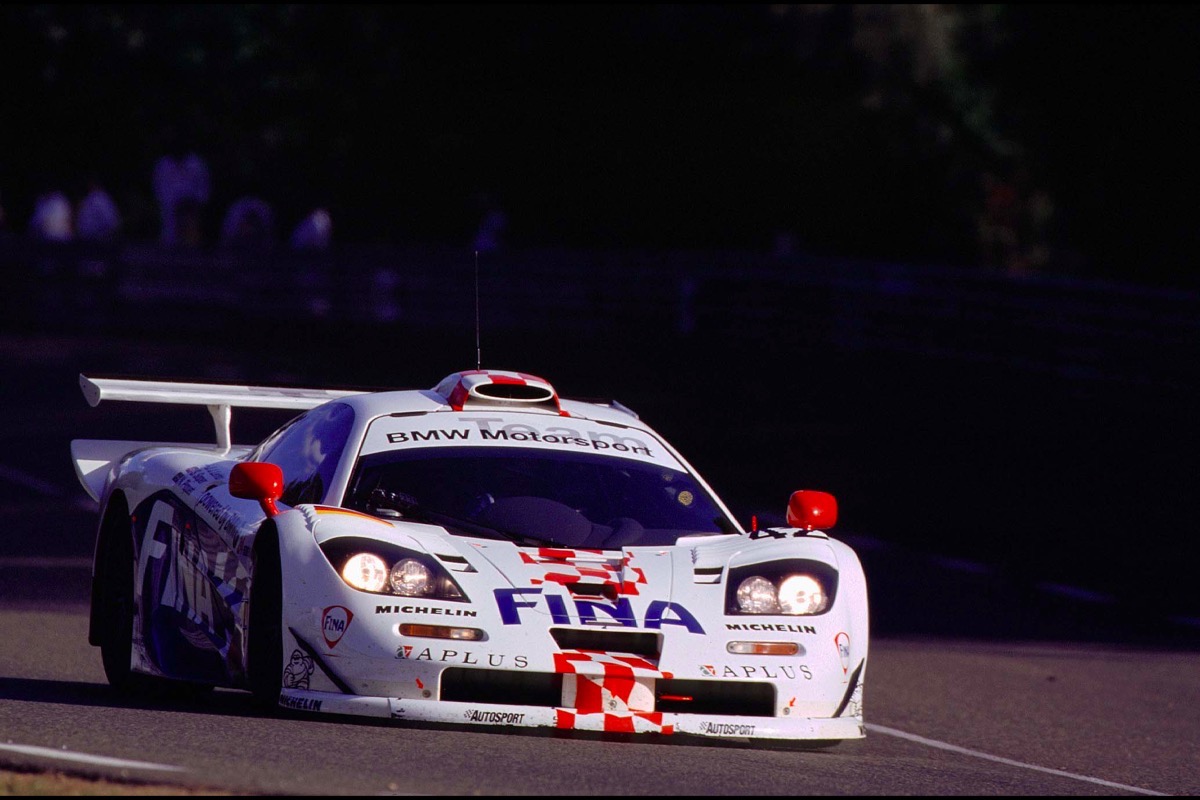 This longer version earned the nickname “longtail”, a staple retained by McLaren to this day. The only problem was: this new car was so different from the regular F1 that a homologation special had to be constructed. That became known as the F1 GT. Only three F1 GTs were built, with one still owned by McLaren.

Major entries included Schnitzer Motorsport and Team Davidoff. The new longtail F1s were able to overcome the 911s and, combined with mechanical woes for Mercedes, Schnitzer Motorsport took victory in the first three races, sending a clear message: “McLaren won’t go down without a fight.” 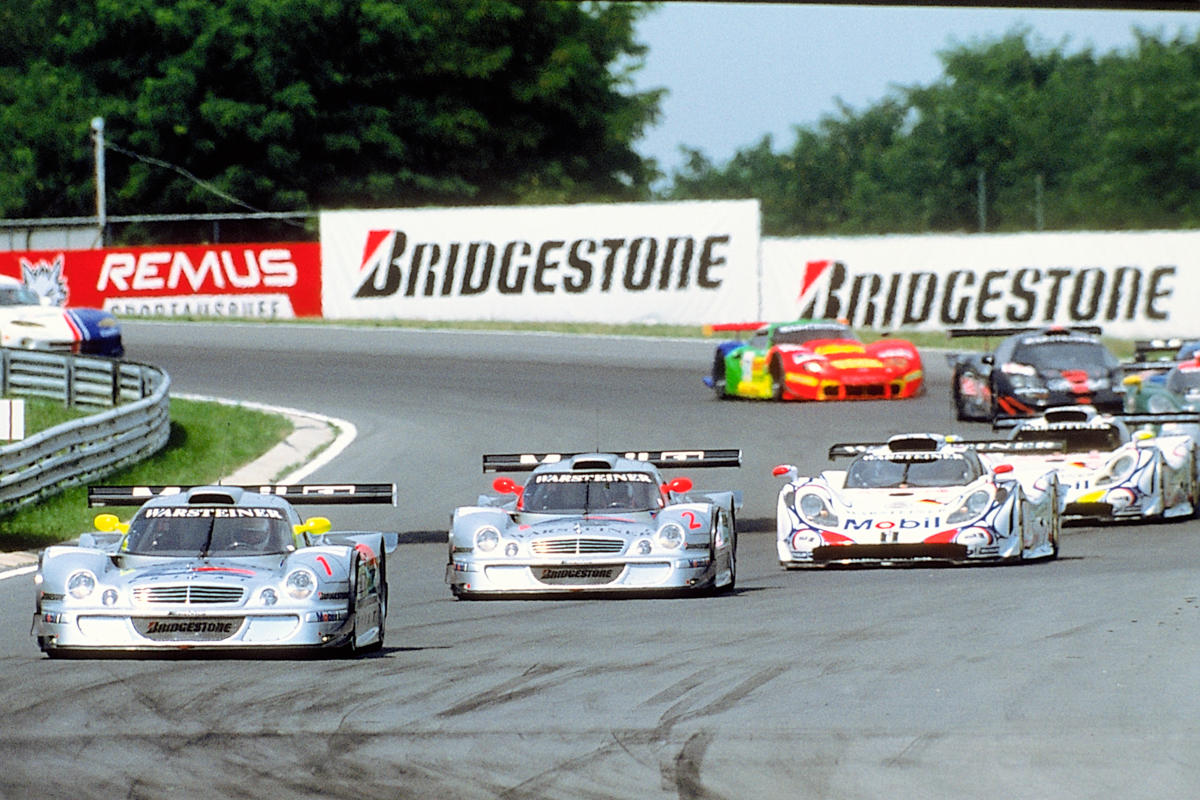 But as soon as Mercedes recovered, it became apparent that the Silver Arrows were in a league of their own, winning both drivers’ and teams’ crowns. BMW officially abandoned the project at the end of 1997, in order to build their own Le Mans Prototype: the BMW V12 LM. At the same time, McLaren realised that the F1 could no longer compete and decided to pull out factory backing for 1998.

Private competitors like Team Davidoff attempted to continue with their aged cars in 1998, but couldn’t finish higher than 5th in a single race. In 1999, the F1 GTR returned to Japan with Team Take One, but it mostly struggled against the competition from the Japanese manufacturers. Hitotsuyama Racing decided to follow the lead of Team Take One and entered their own 1997-spec chassis in 2000. Sadly, things didn’t go much better for them either. However, Team Take One recorded the final competitive race victory for the F1 GTR on November 11th, 2001 at the Mine circuit. Although one possible win was snatched from them the following year. 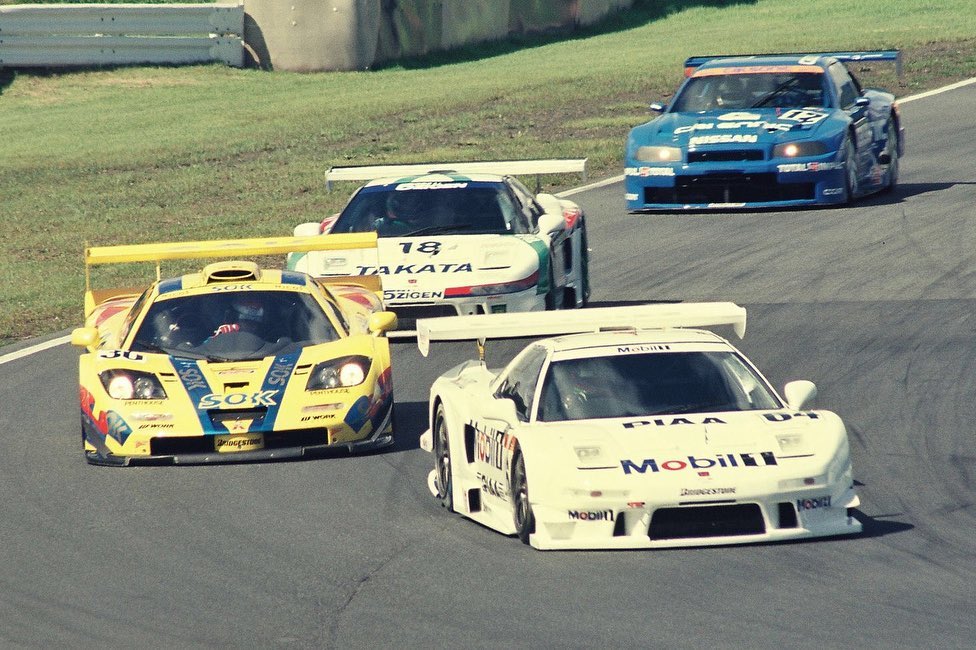 The last official outing for an F1 GTR was a race to forget; on September 25th, 2005 at the Fuji 300km (round 6 of Super GT), Hitotsuyama Racing finished an embarrassing 18th overall – 17th in the GT500 class, 4 laps down on the winner and 7 seconds behind the GT300 winner.